At the turn of the 21 century, did anything look more robust than the Out-of-Africa hypothesis? Not to me. I learned about it during my undergraduate studies in Biology, which I had started in 2001. Such a fascinating topic! And easy indeed! Just some small bits about the life history of some sister species like chimps, plus some boring details about the skulls of a few extinct Homo lineages. But hell…it was piece of cake. In the end, we all descend from a single lineage that appeared in Africa 200,000 years ago, fastly spreading across the globe in the last 50 to 100 thousand years. I was certainly taught about the multiregional model, but it just looked as an already rejected model being hold by some irredents.

It did not looked much different a few years later, as I was attending the first ‘big conference’ of my life. It was 2008, and Svante Pääbo was the invited speaker of the SMBE plenary talk. He presented the newest exciting details about the Neanderthal genome, with a a comparison between the Neanderthal sequence and that of two modern humans, one European and one African. But both modern genomes appeared equally distant to the Neanderthal. He had found nothing contradictory with the Out-of-Africa model of human origins…

Rui Faria did not buy those negative results. At the time a new postdoc in my lab (now the leader of the Farias Gang), he had a lot of expertise on the genetic structure of different fish species, such as the Alosas or Trouts. And he did know that speciation doesn’t work that easy. It can get for up to half a million to one millions years until complete reproductive isolation is achieved (he would tell me). In other words, if Sapiens and Neanderthals ever met (and we knew they had done so in Europe…), they were still on time to have kids. Of course, nobody would ever know if they had tried or not….but hell, humans excel trying weird stuff, isn’t? I still remember Rui condemning our simplistic vision of human evolution, and me and others condemning his weird theories. 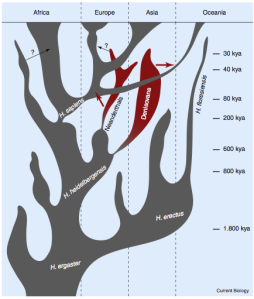 I later discovered he was onto something, after reading recent literature on the topic. Some authors discarded such a possibility, but others dared to estimate that up to 5% of our gene pool could come from “archaic sources“. It was very inspiring to read in a Trends in Genetics review by John Hawks and colleagues: “For any and all advantageous archaic variants with s= 0.01, a 95% probability of fixation requires only 74 archaic-modern matings, each introducing a single copy of the allele into the modern human population“. In other words, they were saying that if (1) Neanderthals were genetically adapted to living in Europe (to a colder climate, for instance) and (2) they had had (some) sex with Sapiens coming from Africa…then, then…Europeans would now carry the Neanderthal variant in their genomes.

I became fully convinced about it when Svante Pääbo visited our lab in 2009. After his talk, Rui suggested a different tactic, based on looking exclusively upon genomic regions that have evolved under positive selection in modern Europeans. There he would find the signals of interbreeding between Neanderthals and “Us” (at least, those “us” of European ancestry). And Paabo eagerly accepted that suggestion. If he hadn’t crash the idea…it wasn’t so crazy, isn’t?

The scientific bomb exploded in 2010, in the form of two new papers published in Science. They had now been able to finish the sequence of the complete genome, and it paid off indeed: Neanderthals were genetically closer to all non-Africans than to current Africans. It wasn’t an impressive figure (from 1 to 4%), but Neanderthal genes were alive! I remember spending the whole afternoon reading a long FAQ summary prepared by John Hawks. Yes, there was a major out-of-Africa movement, but humans managed to get some archaic DNA during the process.

A few months later, Reich et al. published a manuscript describing the genome of a young lady that lived in a Siberian cave ~41,000 years ago, the Denisovan hominin. This individual was found to belong to a new lineage (“Denisovans”), having branched ~640,000 years ago from Neanderthals, and ~800,000 years ago from our own ancestors. Amazingly, some modern humans also carry their genes in our blood, as the genome of Melanesians was found to be 4 to 6% of Denisovan origin (also too in some Asians!).

different hominin genomes sequences, two evidences of admixture with Sapiens. Two shots, two goals. Maximum productivity, you dare to say? Wait! Clues of admixture have been found even in… Africa, for which no ancient DNA seems to be available! (see here and here). This was in 2010 – 2011, but it hasn’t stopped ever since. In 2013, we heard about a third still unnamed lineage being “somehow” present in the Denisovan genomes. And even about the mitochondrial sequence of someone that not only lived in a Spanish cave ~300,000 years ago… but appears to be related to the Siberian Denisovan from “only” ~40,000 years ago!!

In just four years, we have witnessed a wonderful revolution. Wonderful but strenous, certainly. I can show you one of the most recent pictures summarizing what we know in 2014 (the picture on the right works for a summary of the Neanderthal-Denisovan-Sapiens state-of-the-art). But keep your eyes open. In the form of ancient DNA galore, genomics will keep providing us with more timber…